As I mentioned in my last post, there is something about winter that makes me crave carbs.  I tried my hand at bread, why not try pretzels?

I can’t tell you how many times I’ll be walking through an airport or a mall and I will smell Auntie M’s Pretzels.  The scent is intoxicating.  It’s that beautiful combination of honeyed dough with butter and garlic.  It instantly makes my tummy rumble, and I need to have it.

There is also something about a pretzel that’s special.  I’m not sure if it’s that hard layer on the outside, followed by tender chewiness on the inside or if it’s the slightly sweet, but savory flavor, or a combination of all of these things that make pretzels so yummy, but they just are.

So, I browsed through a few recipes, and it didn’t seem so hard.  Like bread, the yeast gets prepped, then flour and the good stuff is added.  It takes some time to rise and then it gets shaped.  Unlike bread, pretzels get boiled before they are baked.  This seemed like a more difficult step, but it wasn’t something that would deter me from making them.

The first part went smoothly.  The yeast fizzed into a fragrant potion.  However, the next part was a little tougher.  No matter how much flour I added, the dough was incredibly sticky.  Since I didn’t want to add too much flour, I gave up and plopped it into a covered bowl to rise.

Once risen, the dough was not pasty at all.  It didn’t stick to my fingers, as it had done before.  I could actually manipulate it simply by hand rolling it into long ropes, which I formed into pretzel shapes.

Then something happened I couldn’t explain or fix no matter what I tried.  After forming the pretzel shapes, the dough crept back on itself, leaving me with something more like a pretzel bun than a pretzel.  I tried less dough.  I tried more.  I fought with it and forced it into the shape.

I finally gave up and boiled the pretzel buns, hoping either the water or the stove would fix the problem.

The boiling of the pretzel buns was easier than I had imagined.  Once in the pot, the dough toughened and formed a skin.  However, it did not expand out into the pretzel shape I desired.  Instead, it slightly shrunk in on itself.

The oven didn’t fix the problem either, however it did produce some gorgeous, full-figured pretzel loaves.  The pretzels looked like they had been stuffed, they were so poufy.

Once again, I was impatient to try them.  I nearly burned my hand on the steaming goodness in front of me.

I paired the pretzel buns with some melted garlic butter and a spicy mustard.  The soft, chewiness of the pretzel bun was tastier than I had hoped.  They may not look like pretzels, but they were delicious! 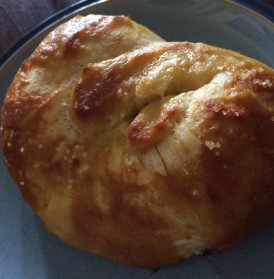 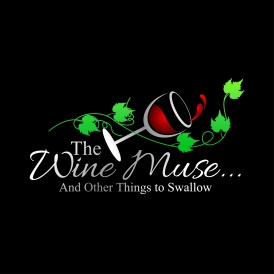